Did you know that Bayonne was intimately linked to the Kingdom of England during the Middle-Ages?  During your visit, take a look inside the cathedral, stand in the nave directly in front of the transept and look up.  There, on the keystone of the ribs of the vault, are the coats-of-arms of the Plantagenets with three rampant lions on a red shield, the third lion added by Richard 1st after his return from the Crusades

Bayonne enjoyed huge trade for three hundred years with England and, not wishing to bite the hand that fed them, fought for the Kings of England during the Hundred Years’ War.  But why Bayonne in particular?
Medieval history inevitably boils down to confrontations between great families and whom inherited what…

Eleanor of Aquitaine, the young local duchess, was first married off, by her father, to the new King of France, Louis 7th.  However, the marriage was a failure and, after 15 years, it was annulled by the Pope and the couple were thus free to try with someone else!  Eleanor did not waste time and re-married very quickly with a young Frenchman (11 years younger in fact) who had been making eyes at her for some time. 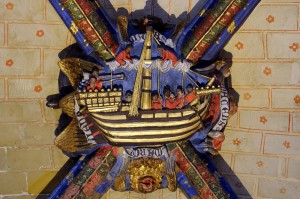 Henry, born to be Count of Anjou,( later known as the Plantagenets) was, in fact, the great grandson of William the Conqueror on his mother’s side and was able to inherit the Kingdom of England after the death of Stephen in 1154.  Eleanor was doing very well for herself! Having lost the job as Queen of France, now found herself with a young man who enabled her to become Queen of England!  The Kingdom of England became part of the Plantagenet empire, the most powerful in Europe.  Bayonne (and, of course, Bordeaux), well and truly part of Aquitaine, became important ports for this empire.

Shipbuilding became a major industry for Bayonne as represented on another keystone, close-by, in the right wing of the transept. With some back-bending, you’ll notice a medieval “cog”, a Scandinavian style of merchant ship, clinker-built and with a new invention, a rear rudder. Rudders had always been on the right side of the vessel (“steer-board”) but the Nordic countries probably invented this new method of steering a ship. Bayonne pirates were the first mariners to introduce the stern rudder into the Mediterranean in 1304.

All the cathedral’s keyst ones may be seen more clearly with a photo exhibition near the western, nave entrance to the cathedral.

Keystones are often a fascinating insight into the past and, here in Bayonne, relate this most important time during the Middle-Ages.  It all came to an abrupt halt when, in 1451, the town surrendered to the army of the King of France.